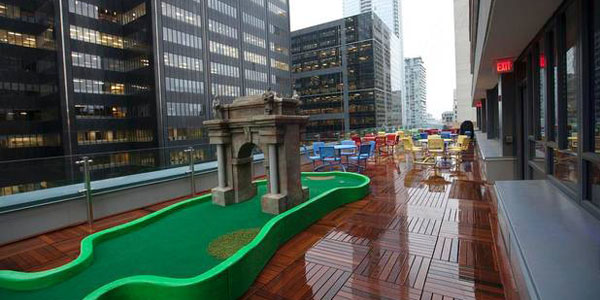 At Google Inc.’s new Toronto office, there is such a thing as a free lunch.

Lunch isn’t just free – it’s colour co-ordinated based on Google’s colours, and indicates how healthy the food is. There are different snack options on each floor to encourage employees to move about, and interact with each other.

Food is just one of the ways Google aims to influence the way employees work and relate to each other in its new downtown Toronto space, which is having a grand opening on Tuesday. “We really encourage movement. People don’t need to spend all day at their desks,” said Andrea Janus, who heads up facilities for all the Canadian offices.

To encourage that flow, the Web search giant has designed every corner of the five-floor office to cater to different employees needs and wants. From fake-grassy hills to sit on, to secret libraries, Google aims to get its people talking.

Each colour-coded floor has a “micro-kitchen” with coffee, refrigerated beverages and a wall of snacks such as pretzels and trail mix. “We moved from an office where we were mostly on one floor; now we’re over five floors so we wanted to really come up with a concept to encourage movement, and interactions between different teams,” Ms. Janus said. “So, all the micro kitchens have different snacks in them – some have healthy snacks,” she said. One floor has gluten-free offerings.

Two visiting employees from the New York office remarked in passing that they’d unearthed an unusual flavour of vanilla mint gum on the green floor.

Despite the variety, Devika Brij, a project manager, says she tends to stick to her (red 16th) floor. “I think we have the best floor. We have the frozen yogurt machine,” she said. She adds that the gym is also one of her favourite parts about the office.

Health is a primary focus in the office, and it extends beyond the menu. Ms. Brij had her first, 20-minute massage last week – the therapists come twice weekly and are covered by Google, and employees simply offer a tip at the end.

Many Google offices around the world have their own “quirky and unusual” features. Google’s Kitchener-Waterloo office, which opened in mid-2011, featured a tube slide. It’s an important part of office identity. “Google does have some guidelines – they’re not standards, there’s some flexibility,” said Annie Bergeron, a lead at HOK, the local architectural firm that worked on the Toronto office. “… I was racking my brains for a feature that was cool, that has not been seen anywhere.” After much debate, the crew settled on set of mini-golf putting greens outside on the the terrace – the perfect place for relaxing in summer, and even for bringing clients.

But the golf is hardly the only game available. There’s foosball and a pool table, and a variety of video game machines.

Google experimented with the idea of having a single games room, but in Toronto “we have them spread out through the office to encourage people to move,” Ms. Janus said. “It’s really a functional design.”

And employees play them. The Big Buck Hunter video game on the twelfth floor is popular and employees are competitive over the top scores.

When a regular desk won’t do, the camping lounge lets employees duck into a tent to have meetings. “It was inspired by a woods prospector tent, with sort of an urban twist,” Ms. Bergeron said. “The white tent is flanked by two leather camping chairs and sits across from a whiteboard that spans the whole wall,” she said.

Huddling on a large red cushion might seem unorthodox, but it’s all part of encouraging people to move around. And one employee nearby said, it’s primarily used for quieter meetings, or conference calls that are conducive to gathering around a central device.

“If you can access your technology you can really work everywhere and I was really impressed with how well technologically supported every space is,” Ms. Bergeron said. “Every meeting space and lounge space allows you to take our technology with you and work. And that’s why the spaces are so well utilized.”

And there’s still some room to grow. The blue floor is currently empty, with an empty fridge and bare desks, leaving room for expansion .

A dimly lit room with a big-screen TV and variety of musical instruments pepper a small music studio on the red 16th floor. The Google Montreal office also has a studio, which allows for inter-provincial jam sessions.

“The music room upstairs is pretty awesome,” said Andrew Swartz, a communications manager. As a former drum and piano player, he said he has been up to try it out. “But only by myself,” he said. “It’s soundproof and there are headphones, so you can keep it to yourself if you want.” The design of the space also gives employs a clue as to how they might use it. “We have a library lounge, and a fireplace lounge, which by nature encourages people to work quietly so they can go there, have some alone time and come out rejuvenated,” Ms. Janus said. The music room is one of the more fun spaces.

Carrying on the music theme, the blue floor has a newly installed DJ station with real records to scratch.

Source: The Globe and Mail